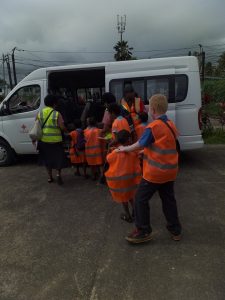 A total of 1,720 students from four schools in the Vatuwaqa vicinity participated during a live Tsunami Drill today.

The drill also marks World Tsunami Awareness Day, which is held annually on the 5th of November.

This is also the first time for a special school (Fiji School for the Blind) to take part in a National Disaster National Office (NDMO) organised Tsunami Drill.

Today’s exercise was an opportunity for the four schools to test their Tsunami Evacuation Standard Operating Procedure while members of the public were also encouraged to identify their own respective evacuation plans.

Director for NDMO, Ms. Vasiti Soko commended today’s Tsunami Drill and said that it was a success. Ms. Soko thanked all the stakeholders and partners for their hard work and contribution towards this valuable initiative.

“With a total of 1,720 students taking part today, the drill was extra special as it was the first time for The Fiji School for the Blind to be included” said Ms. Soko.

“I am happy to report that we were able to evacuate the participating schools within the targeted timeline. Given the recent earthquake(s) in Kadavu, the timing could not have been better to ensure public safety and to continually raise awareness at the community level” said Ms. Soko.

“I personally want to thank the Ministry of Education for taking the lead role in today’s drill, members from the First Responders (Republic of Fiji Military Forces, Fiji Police Force, Ministry of Health, Fiji Navy and National Fire Authority) and the students and teachers who handled the drill in a coordinated and proactive manner” said Ms. Soko.

The Tsunami Drill is part of Government’s commitment towards improving its state of readiness for any tsunami event.