Fire crews in south-east Australia are racing to bring hundreds of bushfires under control before temperatures rise and winds pick up again.

More than 120 blazes are still burning in New South Wales, razing at least 300,000 hectares of land and killing thousands of livestock.

Cooler weather has brought some reprieve but forecasters predict another hot spell at the weekend.

The fires have destroyed buildings in New South Wales, Victoria and Tasmania.

On Wednesday, the heat wave moved up the east coast to Queensland, where a bushfire started on Bribie Island, north of the city of Brisbane.

Temperatures will stay above 30C across the state and are expected to reach the high 40s in some parts on Thursday, forecasters say.

The Rural Fire Service (RFS) in New South Wales said crews have worked around the clock to take advantage of cooler conditions brought on by a southerly wind.

Across the Sydney area the mercury fell to below 30C on Wednesday, after passing 40C on Tuesday. 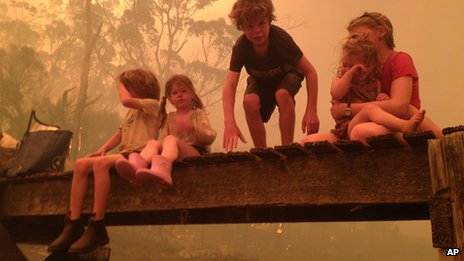 A couple in Tasmania and their five grand-children, pictured here, sought shelter in the water under a jetty as flames closed in on the town of Dunalley

“The cooler conditions have certainly assisted the fire fighters on the ground in being able to get in and get some containment lines established around these fires, and indeed back-burn around some of those containment lines,” RFS Superintendent Matt Inwood told ABC News.

“We definitely will make the most of those conditions while we have them, but we’re very mindful of the warmer conditions expected over the coming week.”

Fifteen fires remain uncontained, with the worst blazes burning in the state’s south near Yass, Sussex Inlet and Cooma.

All national parks, state forests and reserves have been closed to the public.

With scorching temperatures set to return at the weekend, even moderate breezes will prove “problematic and risky”, RFS Commissioner Shane Fitzsimmons warned. 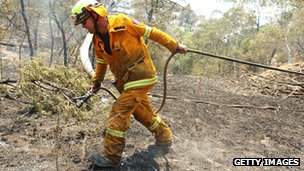 More than 300,000 hectares of land have been razed in the bushfires

Bushfires also continue to cause concern in southern and northern Tasmania.

A large blaze is still burning out of control by the Tasman peninsula, near areas already hit by major blazes over the weekend. More than 20,000 hectares of land and 120 homes have been destroyed.

Photos of a Tasmanian family shown clinging to a jetty surrounded by “tornadoes of fire” have been widely shared by the international media.

Tim Holmes told ABC News that he, his wife and their five grandchildren sought shelter in the water under a jetty when the bushfire closed in on the town of Dunalley, 57km (35 miles) east of the state’s capital, Hobart.

“We saw tornadoes of fire just coming across towards us and the next thing we knew everything was on fire, everywhere all around us,” Mr Holmes said.

Teams have been searching through ravaged buildings and a number of people remain unaccounted for, but no deaths have been reported.

Meanwhile fire fighters in south-west Victoria continue to battle a bushfire near Portland. The state government said it was considering offering emergency grants to people who have lost their homes.

Temperatures have been so high the Australian Bureau of Meteorology has increased its temperature scale to 54 degrees, and added a new colour code.

The bureau has added new colours to its forecast chart to indicate temperatures above the previous 50C-limit because of the heat wave.

It said extreme temperatures would continue in Australia for the next week.