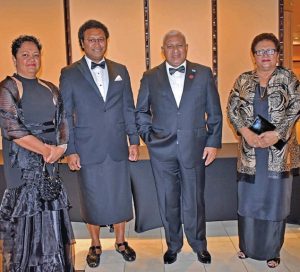 Sydney’s Shangri-La Hotel was a sea of black and white last night as hundreds of people congregated for a black tie-themed fundraising dinner to raise funds for the women and girls of the Homes of Hope in Fiji.

The event, organised by the Fiji Day celebrations committee in Sydney was attended by the Prime Minister Honourable Josaia Voreqe Bainimarama and his wife, Mary.

Prime Minister Bainimarama, while delivering his keynote address, said the funds raised would definitely make a big difference in the lives of those who live at the home.

“It’s easy to see why Homes of Hope has received such acclaim – their mission of rehabilitating victims of rape and trafficking is one that is desperately needed in all corners of the world,” he said.

“But what makes them truly special is the holistic support they provide to women and girls who seek their services. While they offer “homes” as safe havens to victims, their work to provide a helping hand to these girls, young mothers and their children goes far beyond just the roofs over their victims’ heads.

“The Government needs partners to truly have a lasting, grassroots impact in our communities, and they serve as a shining example of what great things we can do when we work together towards a common goal.”

Prime Minister Bainimarama said the generosity shown by those who contributed last night made him proud to serve as Fiji’s Prime Minister.

“As a grandfather of 19, I am dedicated wholly to ensuring that all of Fiji’s children and grandchildren grow up in a world where they are supported, inspired and loved. My passion is not only about providing that sense of undying hope for the Fijians of today, but ensuring that every generation can be even more filled with hope than the last.”

At the event, Senator Fierravanti-Wells congratulated Prime Minister Bainimarama for being a visionary leader, adding his presence on the international stage, particularly during the COP23, showcased not only Fiji’s uniqueness but the whole Pacific region as well.

“Prime Minister, you have taken the Pacific to the world, and brought the world to the Pacific,” she said.

“Also, with the signing of the Vuvale Partnership, this marks an important step in our relationship, the partnership about family- my home being your home.

“Stability, security and prosperity are paramount to both our countries and we look forward to working together to building a Pacific region that is strategically-secure, socially-stable and economically- viable.”