LAS VEGAS (AP) — The check was for $100 million, a payday so mind boggling that Floyd Mayweather Jr. couldn’t help but show it to a few reporters

when the night was done.

“No pictures, though,” Mayweather said, sliding the check out of an envelope. “Don’t want any pictures of it.”

The check will soon be cashed, adding to the millions Mayweather already has stashed in his bank accounts. It was actually just a down payment for his night’s work, which could total more than $200 million by the time pay-per-view sales

The richest fight ever wasn’t the best fight ever, but that wasn’t entirely Mayweather’s fault. He did what he usually does Saturday night against Manny Pacquiao in a win that cemented his legacy as the best of his generation, even if he didn’t win any new fans doing it.

Still, the fight will be a tough act to follow if only because of the staggering money it brought in. Hard to imagine Mayweather fighting for a paltry $30 million or $40 million after a night he made history with the richest single payday any athlete of any sport has made.

He says he’ll fight once more in September, then hang up the gloves. Mayweather says it’s time to enjoy the fruits of his labor from a sport that has consumed his life since he was a kid throwing punches in Grand Rapids, Michigan. 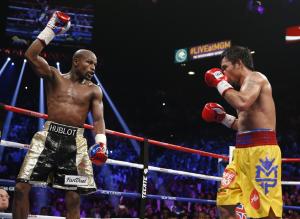 “I don’t really think I’ll miss the sport,” Mayweather said. “I don’t even watch boxing. At one particular time I loved the sport of boxing. I wanted to go to every fight and wanted to be at every boxing event. But I just lost the love for the sport.”

Before a well-heeled crowd of 16,507 that cheered every time Pacquiao threw a punch, Mayweather dominated late once again to pull out a decision win that seemed closer in the ring than it did on the scorecards. Pacquiao even thought he won, though punch stats showed Mayweather landing far more punches and even throwing more than the usually frenetic Filipino.

Pacquiao would blame a shoulder injury suffered in training last month for not being able to throw more right hands. His handlers would blame Nevada boxing officials for not allowing him a shot to numb the shoulder just before the fight, though the excuse rang hollow.

“I cannot use a lot of my right hand but the fight was still good,” Pacquiao said. “What we wanted to do we couldn’t do because of my shoulder. But he’s fast, he’s a good boxer. Give the credit to him. He won tonight.”

Pacquiao’s trainer, Freddie Roach, said his fighter would like a rematch, but there is little chance of that. Not with Pacquiao’s shoulder injury, and certainly not after the perfect financial storm of a fight that cannot be replicated. 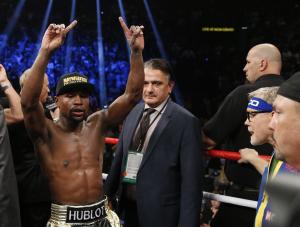 Pacquiao likely made $100 million himself for the fight that packed the MGM Grand arena with celebrities, sports stars and people paying

as much as $40,000 for ringside seats. The bout was delayed for about a half hour because pay-per-view sales

were overwhelming cable and satellite systems, a good omen for the paydays of both fighters.

But while Pacquiao was the crowd favorite, Mayweather was the masterful boxer. He may not have ended the career of the remarkable career of the Filipino who once sold doughnuts on the streets to survive, but it’s doubtful Pacquiao can continue as a big pay-per-view much longer.

“I did my best, but my best wasn’t good enough,” Pacquiao said. “I fought a good fight.”

Mayweather fought a good fight, too, even if it wasn’t the crowd pleasing affair fans wanted. He used his reach advantage to land jab after jab, and was so elusive that Pacquiao was only able to land one of every five punches he threw, including only 18 of 193 right jabs.

It was another great defensive performance from a fighter who knows just what he has to do to win. Mayweather remained unbeaten in 48 fights in a career that has now stretched 19 years. 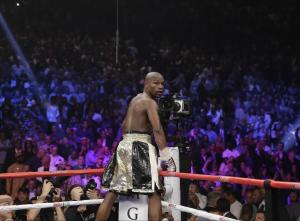 Floyd Mayweather Jr. looks back after greeting the crowd after his win against Manny Pacquiao.

“I knew I had him from round one,” Mayweather said. “I went out there and felt him out. I wanted to see certain moves. Everything is a calculated move. I’m 10 steps ahead of any other fighter.”

If Mayweather is serious about hanging up the gloves after one more fight, he’ll go into the history books as the best of his generation — and certainly the richest. Because he doesn’t take chances and turns fights into chess matches, though, he’s not going to be mentioned on any short list of all-time greats even while he insists he’s the best ever.

Mayweather says he plans to give up all three welterweight titles he holds so other fighters have a chance at them. That will also make it easier for him to choose an opponent for a September fight that he says will be his last.

But there will be pressure to continue. Rocky Marciano’s record of 49-0 could be broken with two more fights, and the MGM is building an arena on the Las Vegas Strip that Mayweather could open next spring if he keeps fighting.

“I’m only human, I contradict myself,” Mayweather said, leaving open the possibility of more fights. “I’m not perfect.”

He wasn’t against Pacquiao. But he was good enough to pocket his $100 million check in boxing’s richest fight.