It was the happy moment for Jayesh Mishra and Rohal Ram to receive the green light to own a flat which they can call its own.  After having decades of family issues and moving from place to place, now the Mishra brothers can live happy and enjoy their living.

Jayesh Mishra ( 23 years ) who is mentally challenged  and his younger brother Rohal Nitij Ram ( 18 years )  who is currently in year 13 had were orphaned very young aged.  They went through lots of difficulties and challenges in life after they lost their both parents.  Rohal has been working after school  to feed his elder brother as he was the only one responsible to look after him.

According to Rohal his mother was murdered in 2009 by her de- facto partner and his father had heart attack in 2011.

Since then Mishra brothers have seen lots of challenges in life .However they both continued fighting this challenges with a hope to get a better life one day.

When I moved out of my uncle home in June this year  with my brother I  feel sad about the my situation . I had no place to go however some of my friends helped me out.

According to Counsellor Mohenesh Singh he still recalls when Rohal contact him at night around 9.30pm through the help of his friend’s mother.

I made a pledge to stand for Mishra brothers and I went out of my way to seek help for the brothers so that they can have better living.

Counsellor Singh said that his pledge was hear by Mr Jerry Goundar who is one of the social worker in Nadi and Chairperson of Navo Sai Organisation.

I am thankful to  Satya Sai Service  Organisation who came forward and sponsored the cost of the flat where Mishra Brothers are staying now said counsellor Singh.

By supporting the brothers we trying to prepare Rohal to be independent and get stable in life so he can take good care of his brother Jayesh .

Singh believes that every Fijian student look at their teachers with hope when they are facing challenges. It is responsibility of every teacher to bring positive change in every student’s life and when all their doors are closed for them we should show them the right path. We are educators and we are born to make difference. 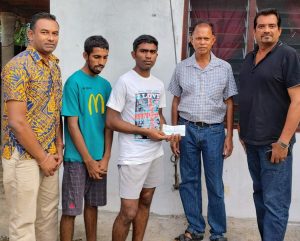