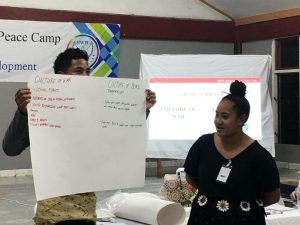 Ms. Santra Park, one of the HWPL delegates and the General Director of World Alliance of Religions’ Offices in the region said, “Youth will experience different ethnicities with different religions when they go out into the global world. One of the main religions of Tonga is Christianity, but I hoped that this event would allow youth to experience religious diversity in advance and learn how to co-exist with people of different religions. HWPL’s religious youth peace camp might have been a great opportunity to raise international peace leadership for the Tongan youth.”

The Deputy President of youth group from the Mathias Anglican Church, Ms. Lute Tukuafu said: “I love this event and it taught us more about peace. peace is a sign or a word making others realize that they are one. And I will work together for all mankind and for peace as well.”

The youth participants wrote peace letters to encourage religious leaders of Tonga and beyond to participate in peacekeeping activities, as well as the letters of support to ur 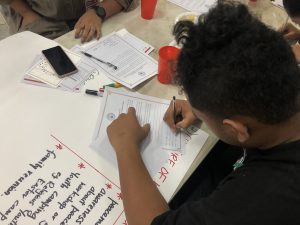 ge high governmental officials of Tonga to support for the Declaration of Peace and Cessation of War(DPCW) to be submitted as a resolution at the upcoming UN General Assembly.

The DPCW is the declaration, first drafted and proclaimed in 2016 by the joint efforts of the HWPL and the HWPL International Law Peace Committee, consisted of 21 international law experts from 15 countries. It aims to eradicate violence in every form and focuses on the self-determination of the nation, ethnic identity and spreading a culture of peace.

Reverend Katherine Vaka of St. Mathias Anglican Church said, “I look forward to keep in touch with HWPL in order to regularly organize youth peace camp in Tonga. In the upcoming December, there will be a youth gathering where all the Angli

can youths of the Pacific region come together. I would like to combine the youth peace camp program offered by HWPL with the gathering.”

HWPL has been carrying out 253 comparison of scripture meetings in 128 countries for the achievement of substantial and sustainable peace. It has received 29 replies from the high-level government officials from 26 countries, including Kiribati and Tuvalu from the South Pacific. In Tonga, HWPL received support for the DPCW from the high-level personnel, including the Minister for Agriculture, Food, Forests and Fisheries and the Deputy Prime Minister.