CAPTION: The parents of Ms Nafeek had repeatedly appealed to King Abdullah to pardon her.

Saudi Arabia has beheaded a Sri Lankan domestic worker for killing a baby in her care in 2005 in a case that has been widely condemned by rights groups.

The maid, Rizana Nafeek, had denied killing the four-month-old boy.

Her supporters say she was only 17 at the time of the killing. They say her execution is a breach of international child rights.

The Sri Lankan government condemned the execution, which it said took place despite numerous clemency pleas.

The Saudi interior ministry said on Wednesday that Ms Nafeek was executed for smothering the infant after an argument with the child’s mother in the town of al-Dwadmi.

The Sri Lankan parliament held a minute’s silence on Wednesday in honour of Ms Nafeek.

News of the execution came on the same day that the International Labour Organization (ILO) said that laws were needed “urgently” to give greater protection to domestic workers.

The ILO report estimates that only about 10% of all domestic workers – about 5.3 million people – are covered by labour laws to the same degree as other workers.

In Sri Lanka itself, the execution has rekindled debate about the safety of expatriate workers in the Middle East and about the poverty which drives people including Ms Nafeek to seek work abroad.

In a statement, the Sri Lankan foreign ministry said that President Rajapakse and the government deplored the execution “despite all efforts at the highest level of the government and the outcry of the people locally and internationally”.

A Sri Lankan opposition MP who campaigns for Sri Lankan workers abroad, Ranjan Ramanayake, described the Saudi government as “dictators” who would never execute Europeans or Americans, only Asians and Africans.

The parents of Ms Nafeek had repeatedly appealed to King Abdullah to pardon her. Her father is currently in hospital, officials say, and her mother is too distressed to talk about the execution. 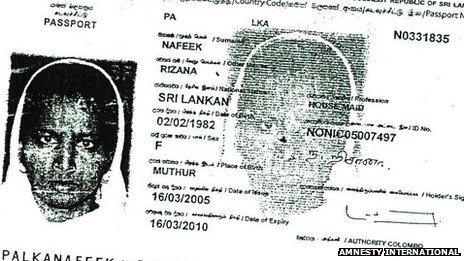 Ms Nafeek was convicted in 2007 of murdering four-month-old baby Naif al-Quthaibi, whom she was caring for in 2005.

She said that an initial confession was made under duress and without linguistic assistance. Supporters say that she also had no access to lawyers before her conviction.

Human rights groups including Amnesty International and Human Rights Watch (HRW) have criticised the Saudi authorities for their handling of the case, as have campaigners in Sri Lanka, who argue that there were also serious translation problems at the time she confessed to the crime.

They argue that her reported execution breaches the UN Convention on the Rights of the Child which Saudi Arabia has ratified.

“Rizana Nafeek is yet another victim of the deep flaws in Saudi Arabia’s judicial system.”

The BBC’s Charles Haviland in Sri Lanka visited Ms Nafeek’s home village in 2010, where he saw a school register and a birth certificate confirming her date of birth.

Our correspondent says that if the documents are genuine, she was a minor when the alleged offence was committed. It also appears that employment agents falsified her age in order for her to get work in Saudi Arabia.