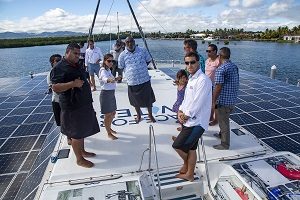 The Race for Water Foundation is dedicated to preserving our oceans. The mission is to raise awareness of marine plastic pollution and to offer land-based solutions to tackle the critical threat facing our oceans. The ambassador vessel Race for Water, nearly two years in to a 5-year international expedition, received the official welcome to Fiji today at Port Denarau Marina.

The 114-foot vessel, which is the world’s largest solar powered catamaran, hosted authorities and guests on board today for the official welcome and will remain in Fiji until the 19th of January.

The unusual catamaran, Race for Water, which left Lorient on the North French Atlantic coast in April 2017, exemplifies that a vessel can be powered by renewable energies since it travels around the world solely using a combination of clean energy sources: solar power with the sun, the wind power through a 40 square metre towing kite and hydrogen which gets converted into electricity.

During the stopover in Fiji, the Race for Water Odyssey will take part in a series of events. Workshops will be held on board with governmental authorities, business leaders and NGOs to introduce the plastic waste to energy solution developed with the French engineering company ETIA.  A beach clean-up open for all is planned at Wailoaloa beach for Saturday 12th of January from 09:30.

The scientific research and findings from recent missions by Fijian scientist, Andrew Paris, will be presented together with the Race for Water Odyssey projects at the University of the South Pacific conference to be held on their campus next Tuesday 15th of January which is open to the public and starts at 11am