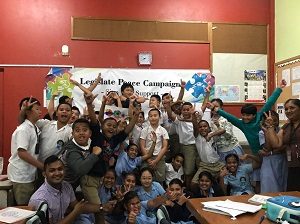 On 12th of February, the Peace Summit of Pacific Leaders will be held at Parliament of New South Wales organized by Pacific Islands Forum (PIF) and an international peace NGO under the UN ECOSOC named Heavenly Culture, World Peace, Restoration of Light (HWPL).

This summit has the theme of ” 2019 Pacific Leaders Summit for Peace, Sydney : Center of Spreading Peace Beyond Ethinicity and Borders” with participants including political leaders of the PIF member states and the HWPL representatives including Chairman Man Hee Lee, a Korean peace activist and Korean War veteran.

Participants will discuss the Declaration of Peace and Cessation of War (DPCW) to promote a culture of peace in the Pacific countries. The DPCW was drafted by HWPL and international law experts and UN officials to establish peace as a global norm through international cooperation and active participation of citizens, and ensure the realization of rights to the development of nations in line with the UN Sustainable Development Goals (SDGs).

According to HWPL, along with strategic partnership with African Union (AU) through an MOU with Pan-African Parliament (PAP) in AU for international cooperation in peacebuilding, this peace summit is expected to further receive support from governments and social leaders in Asia-Pacific countries.

“Our approach to peace has a foundation in the power of people. About 1.73 million people, 631 events in 176 countries, have taken part in the Legislate Peace Campaign to advocate the DPCW to be discussed by states and international organizations, raise awareness of peacebuilding by civil society, and ultimately promote a culture of peace through participation of people transcending language, ethnicity, culture or national border,” said Mr. Ian Seo, General Director of Department of Public Relations, HWPL.