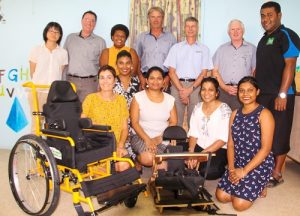 The Fulton Hogan Hiways Joint Venture (FHHJV) Board Chairman, Bob Fulton, said that the results of their contribution to the Frank Hilton Organisation (FHO) Mobility Device Programme had “exceeded their expectations”.

The FHHJV Board of Directors recently visited FHO in Brown Street, Suva, where the Organisation’s CEO, Sureni Perea, reported on the impact made by the FHHJV donation last year of 103 mobility devices for children, aged from less than one to 18 years, with physical disabilities.

Mr Fulton said, “ The FHHJV Board and I are really happy to see that the donation of wheelchairs is being put to such good use. It feels great to be part of such a life-changing programme. I also want to thank the staff at FHO for a job well done and the great work they are doing.” 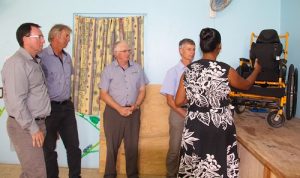 Last year, FHHJV made a donation of FJ$70,000 to purchase the wheel chairs and provided material and labour to construct the workshop space around the container purchased by the Frank Hilton Organisation for wheelchair storage. This provides a space for the trained technician to repair and modify the mobility devices so that the children have continued proper postural support and access to daily living activities.

Mrs Perera said that so far, 34 children had been fitted with mobility devices provided by FHHJV – two from the Northern Division, 11 from the Western Division, and 21 from Central.

FHO has a trained team to support the programme in urban areas and conduct Outreach programmes into rural communities. As well as a mobility device technician, there are two physiotherapists, two community rehabilitation officers and an occupational therapist.

Not only are the recipients being identified through the Schools of Special Education, but also, the FHO Field Team is working with Health Centres in the rural areas to locate children with disabilities who have not been previously identified. This also provides the opportunity to conduct vision and hearing tests on children who might otherwise be overlooked.

One such child is the recipient of a Moti Start’ mobility device. The one-year-old boy is now able to sit and is beginning to stand and move without the wheelchair FHO CEO, Mrs Perera, said that the boy’s mother appreciated the support that was provided and the changes she has seen it bring into her son’s life.

“This ‘Moti Start’ device for paediatrics is the first of its kind in Fiji and was only made available through the support of FHHJV. Had this product not been available, and had we not received support from the Government to conduct the outreach, this young boy would not have received this timely intervention and his disability could have developed further,” said Mrs Perera.